One in three employees bullied by their boss

Recent Employsure State of Work research, conducted by Roy Morgan, found a staggering one in three employees have felt bullied by a boss.

The findings reveal bully bosses are widespread in Australian workplaces. Senior Employment Relations Adviser Natalie Clark from Employsure said, “The knock-on effect of the #MeToo Movement is that bullying awareness is increasing, and employees have a greater awareness of their workplace rights which makes workplace relations highly important for the success of a workplace.

“We need to be mindful that bullying isn’t just repeated name calling or intimidating behaviour. Sometimes it can be deliberately changing the roster because it inconveniences the employee, or continually overloading an employee with deadlines that are impossible to meet.” 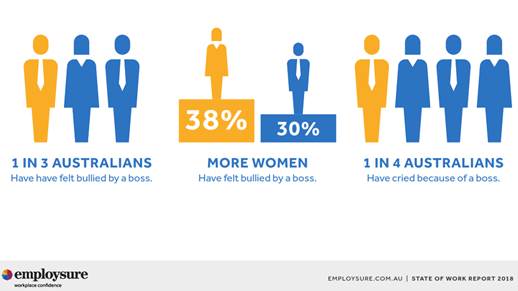 The research also noted that while one in four have cried because of a boss, not all bosses are bullies. It explained that bosses can be seen to be horrible for being cold, distant, harsh, or bitchy however, it might just be personality clashes. Even if it is not bullying – the fact an employee perceives it to be is problematic, causing cultural rifts, bullying claims, and absenteeism in the workplace.

Ms Clark said, “The vast majority of employers are incredibly invested in creating a positive workplace and want employees to feel supported. These results reinforce what employers are telling Employsure – that they find it difficult to have conversations about performance because it is really easy for employees to claim they feel victimised or bullied.”

Worryingly, the study also revealed more women have felt bullied by a boss compared to men. There may be multiple reasons for this according to Ms Clark, who said, “Women still experience gender bias and ideologies that they are somehow inferior to men in the workplace. It is particularly common in male-dominated industries such as IT, Tech, or Construction.”

Employers and managers are entitled to allocate work and to give fair feedback on an employee’s performance. These actions cannot be considered workplace bullying if they are carried out in a reasonable manner and take into account specific circumstances.

Summit to urge businesses to focus on sustainability

End of JobKeeper no barrier to revenue, investment and jobs growth for SMEs

To negotiate or not? A guide to managing conversations around budget

Cashing out with confidence

How to turn your side hustle into a full-time gig